Pick of the Week

Directions to add the Pick of the Week on your parish website: 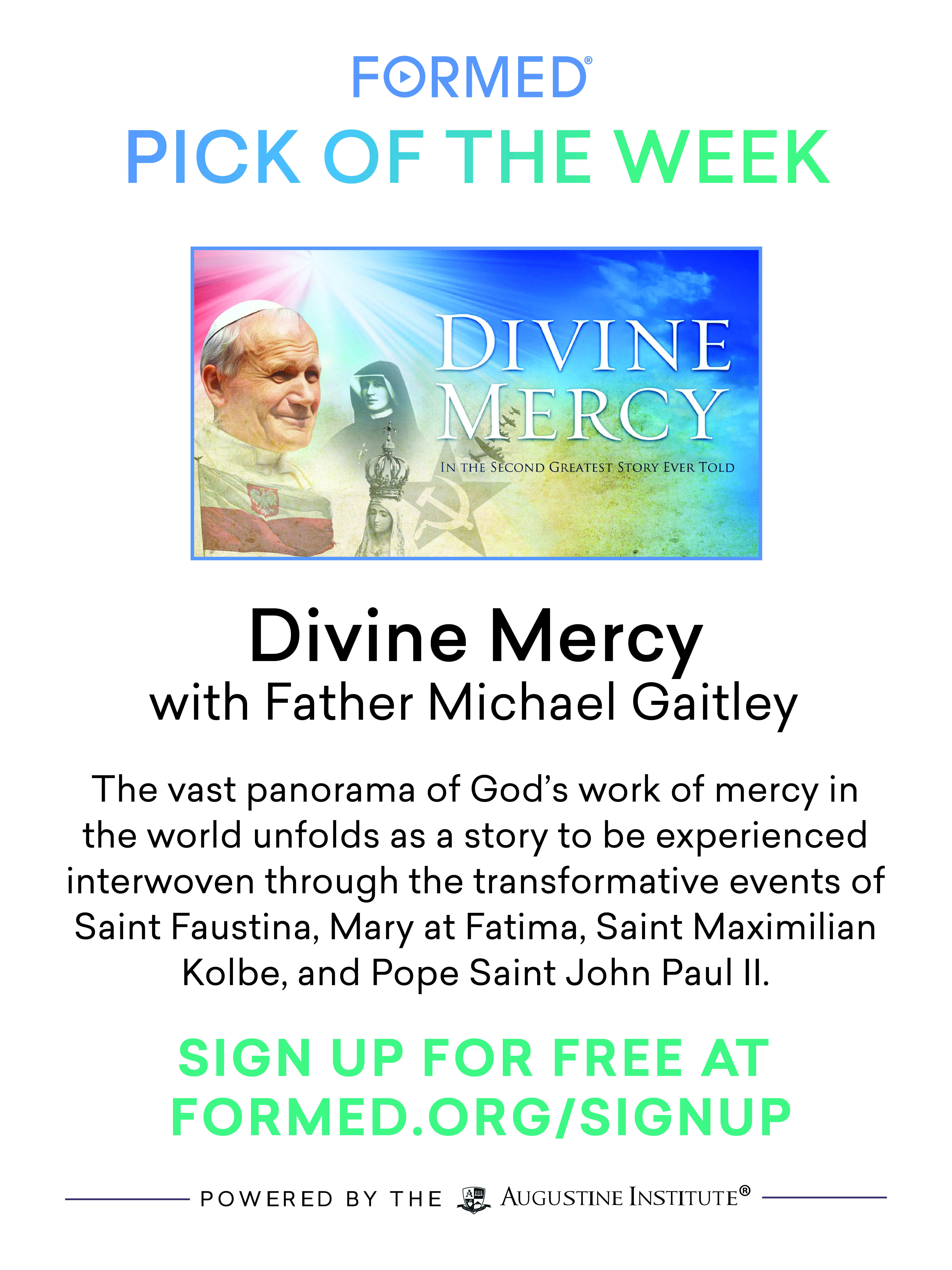 Divine Mercy in the Second Greatest Story Ever Told 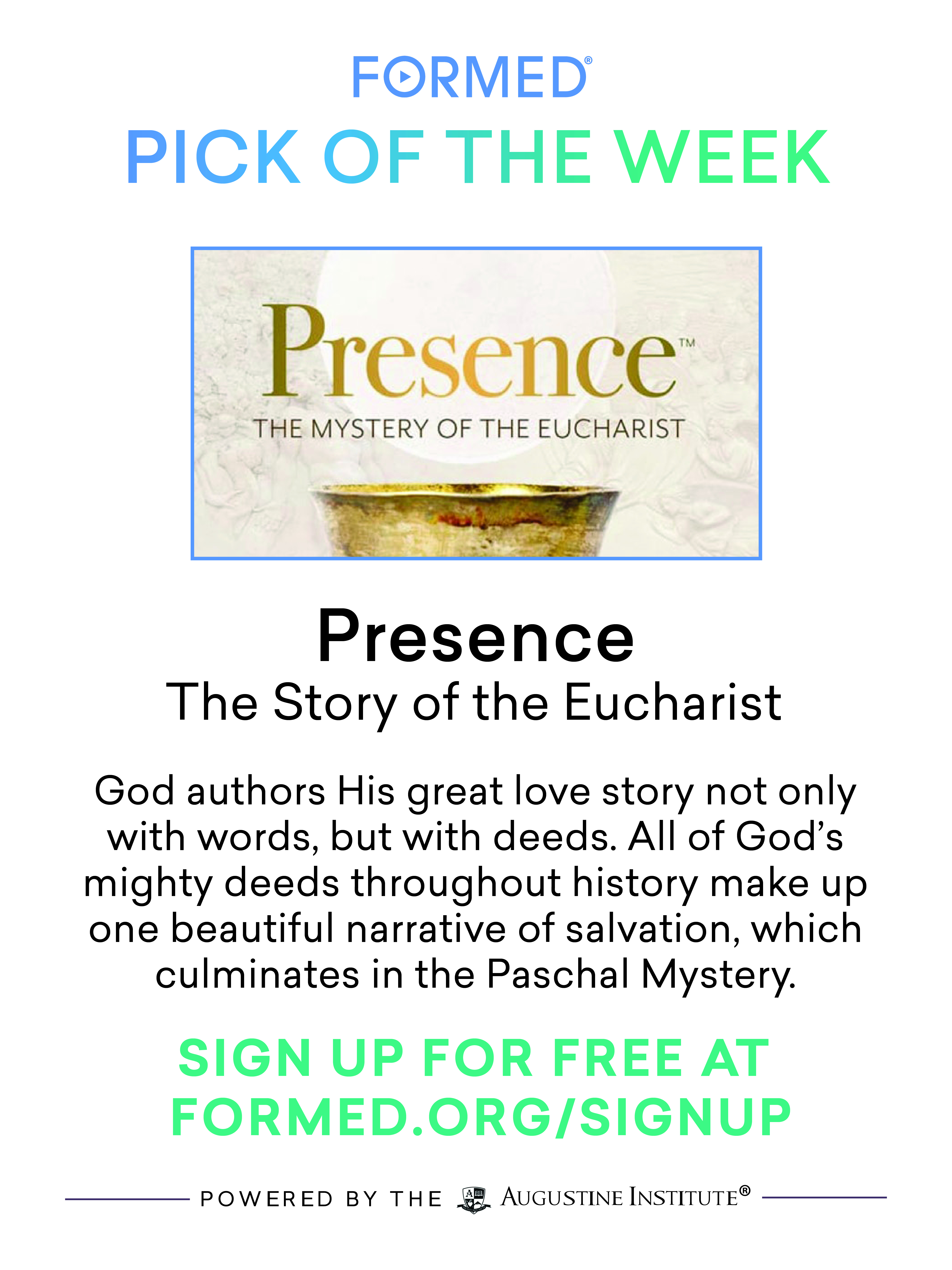 Presence – The Story of the Eucharist 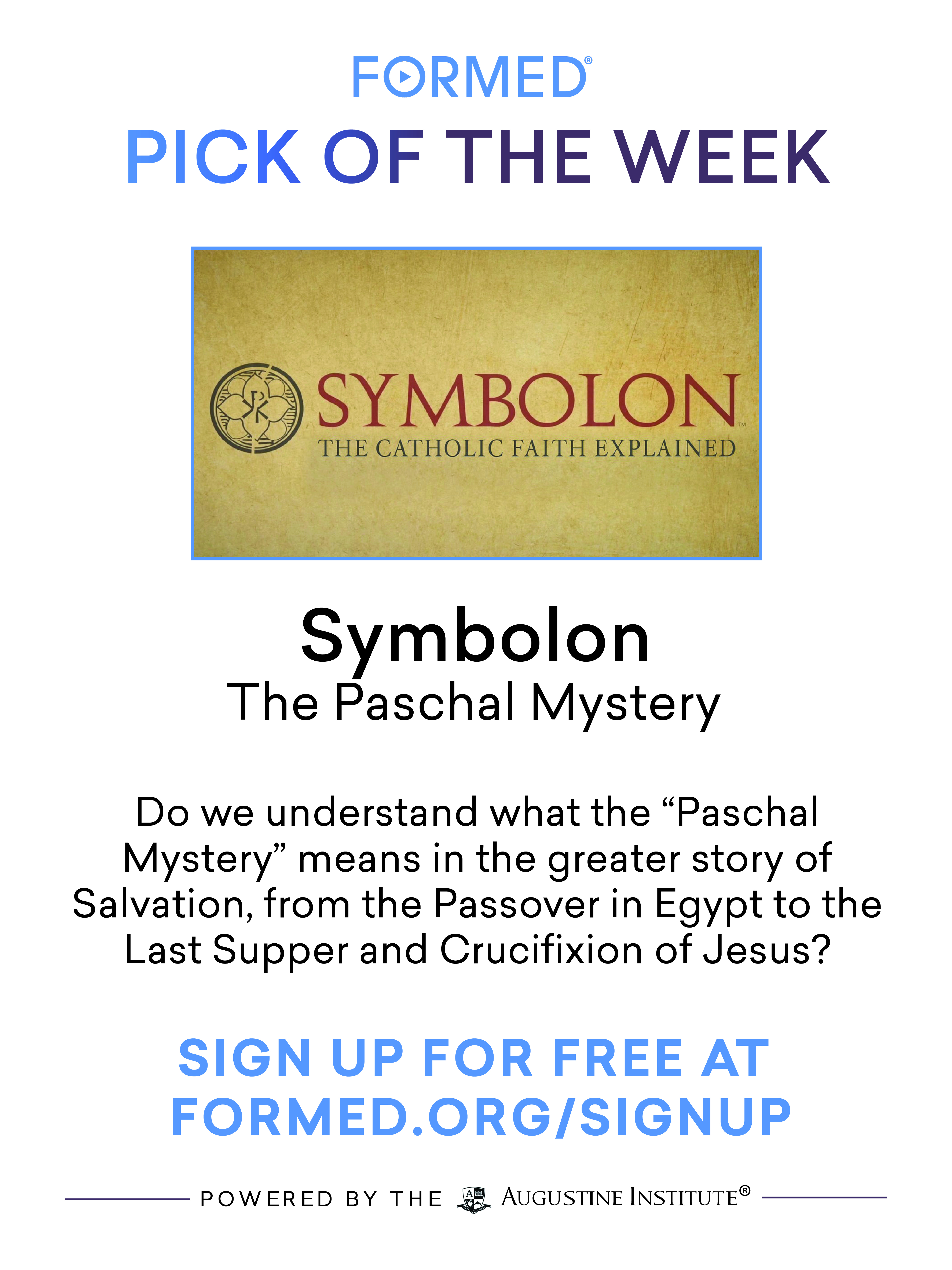 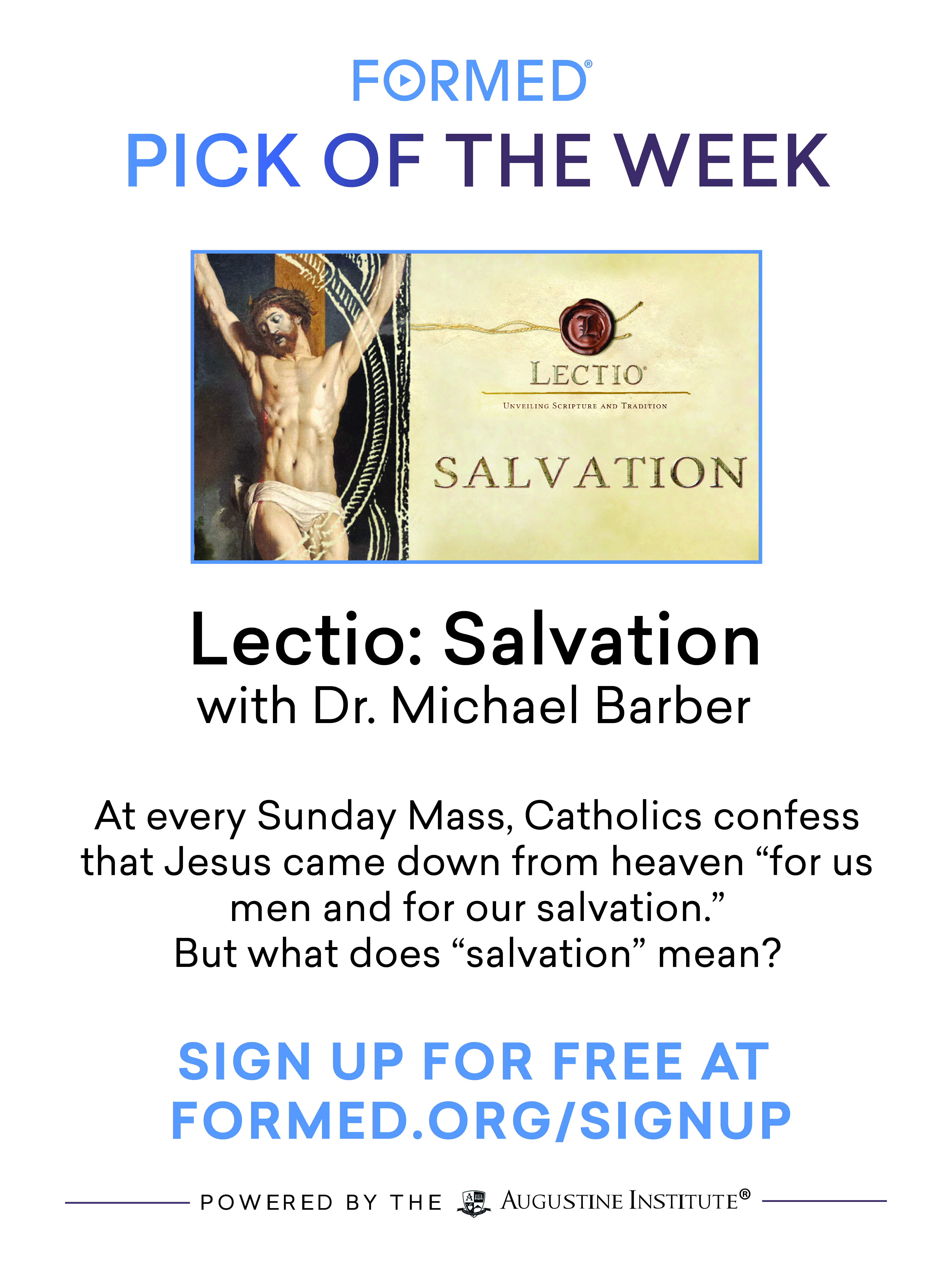 Pulpit Announcement:
If your parish is doing the Lectio: Salvation parish-wide study:
At every Sunday Mass, Catholics confess that Jesus came down from heaven “for us men and for our salvation.” We’ve been journeying with Lectio: Salvation this Lent as a parish and diving into what salvation really means. It’s never too late to join! You can watch the whole series with your free parish subsciption by simply selecting our parish’s name during registration at formed.org/signup.

If your parish isn’t doing the Lectio: Salvation parish-wide study:
At every Sunday Mass, Catholics confess that Jesus came down from heaven “for us men and for our salvation.” But what does “salvation” mean? The remarkable 10-part video series, Lectio: Salvation, provides a thorough, deeply Catholic, and deeply biblical, answer. You can watch with your free parish subsciption by simply selecting our parish’s name during registration at formed.org/signup. 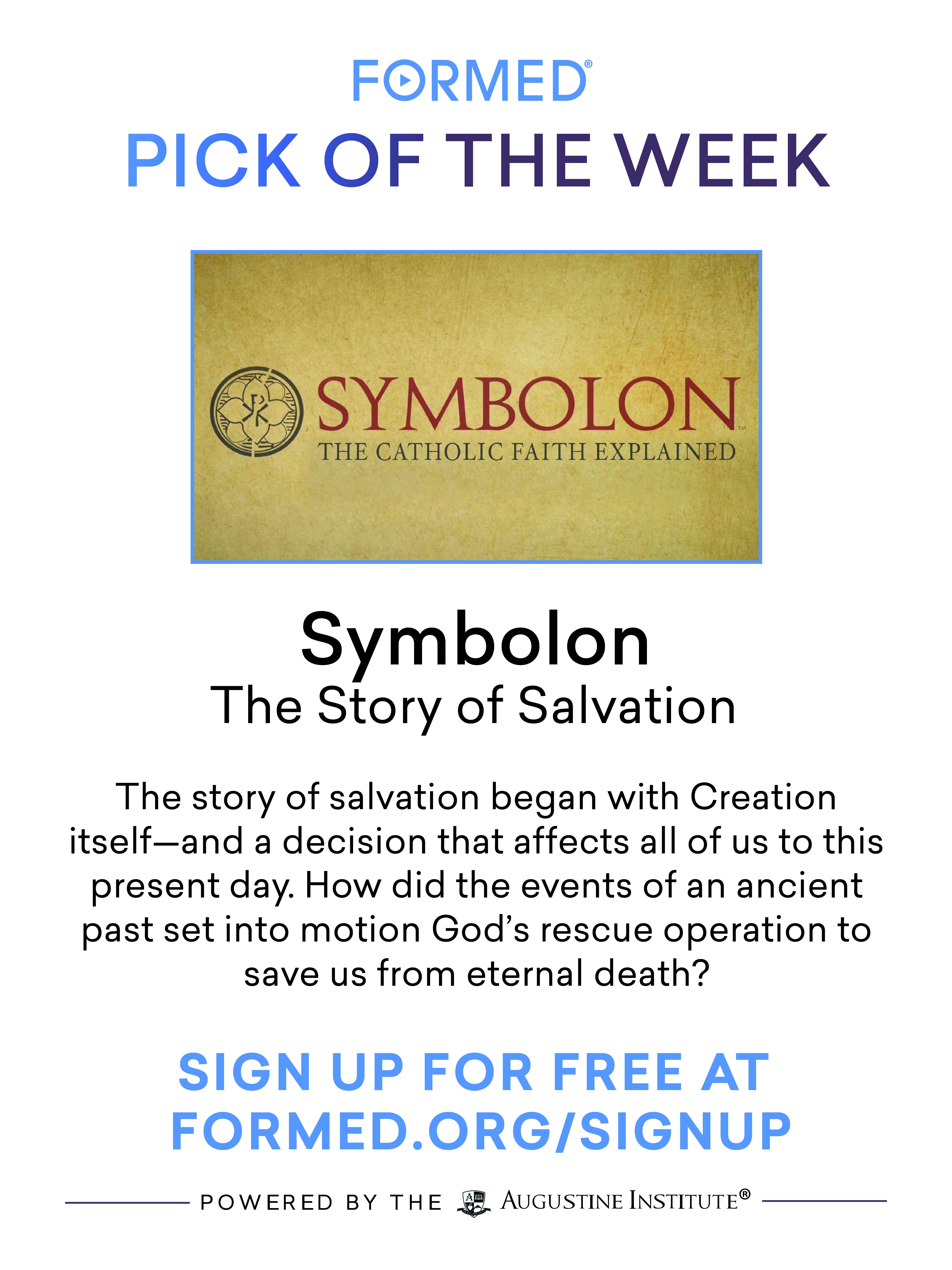 Symbolon: The Catholic Faith Explained – The Story of Salvation

Pulpit Announcement:
Walk in the steps of Jesus of Nazareth throughout the story of Salvation in this week’s pick from FORMED. You can watch with your free parish subsciption by simply selecting our parish’s name during registration at formed.org/signup. 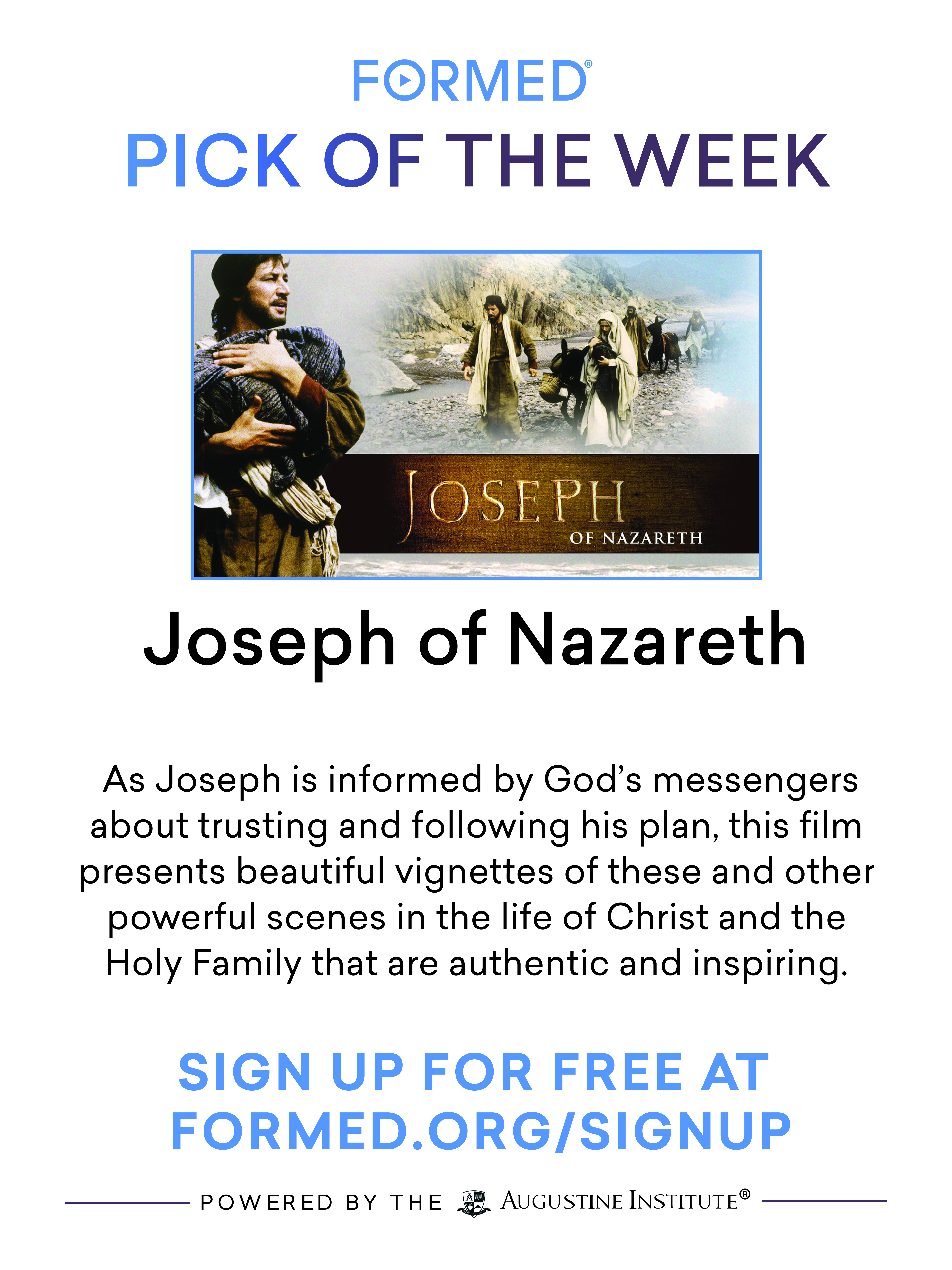 Pulpit Announcement:
This week, we celebrate the life of Saint Joseph. Join us in learning more about his humble life by watching the film, Joseph of Nazareth, on FORMED with your free parish subsciption. Sign up by simply selecting our parish’s name at formed.org/signup. 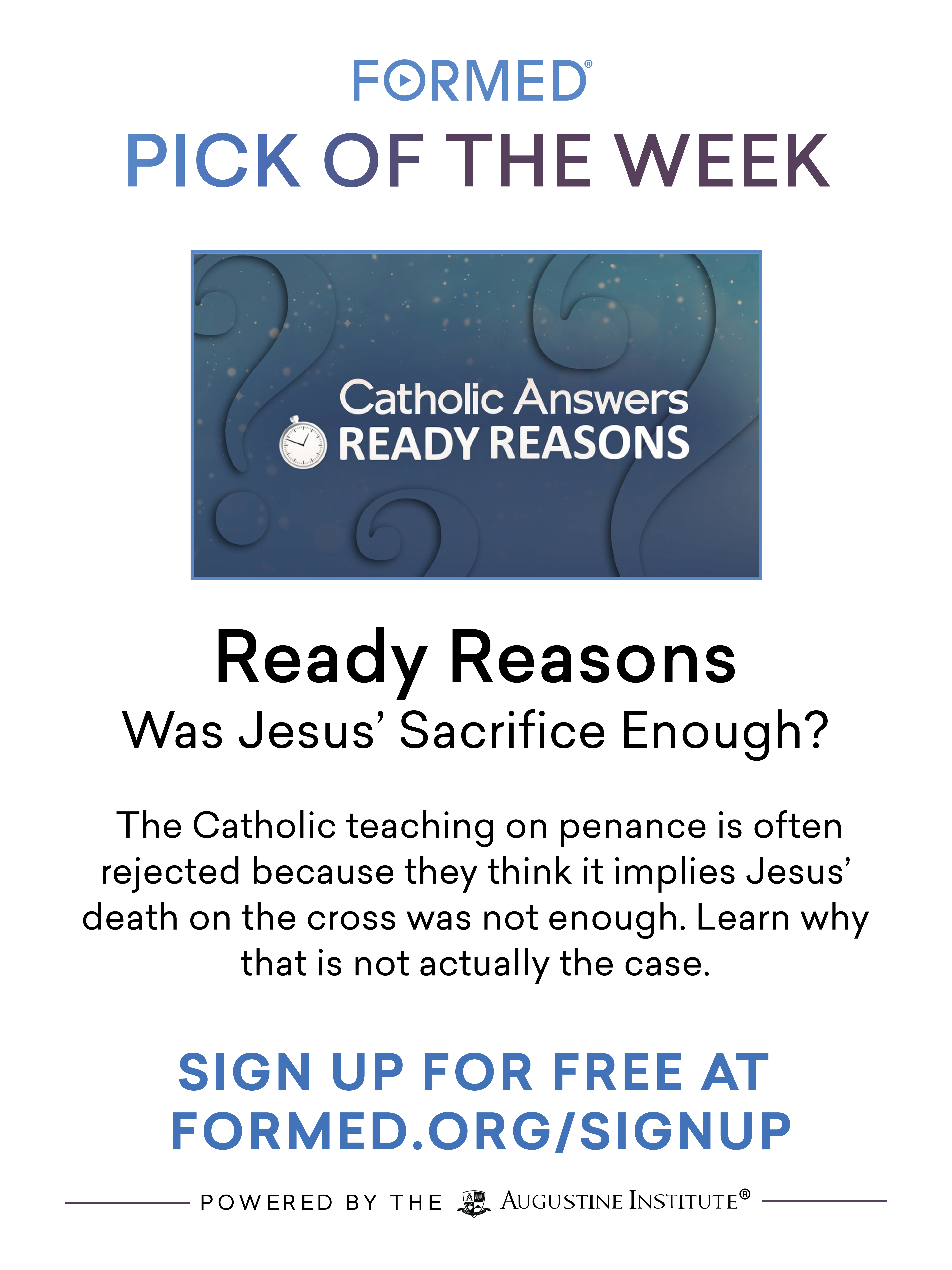 Pulpit Announcement:
The Catholic teaching on penance is often rejected because they think it implies Jesus’ death on the cross was not enough. Learn why that is not actually the case with an episode from Catholic Answers Ready Reasons on FORMED. Sign up for your free subscription by simply selecting our parish’s name at formed.org/signup. 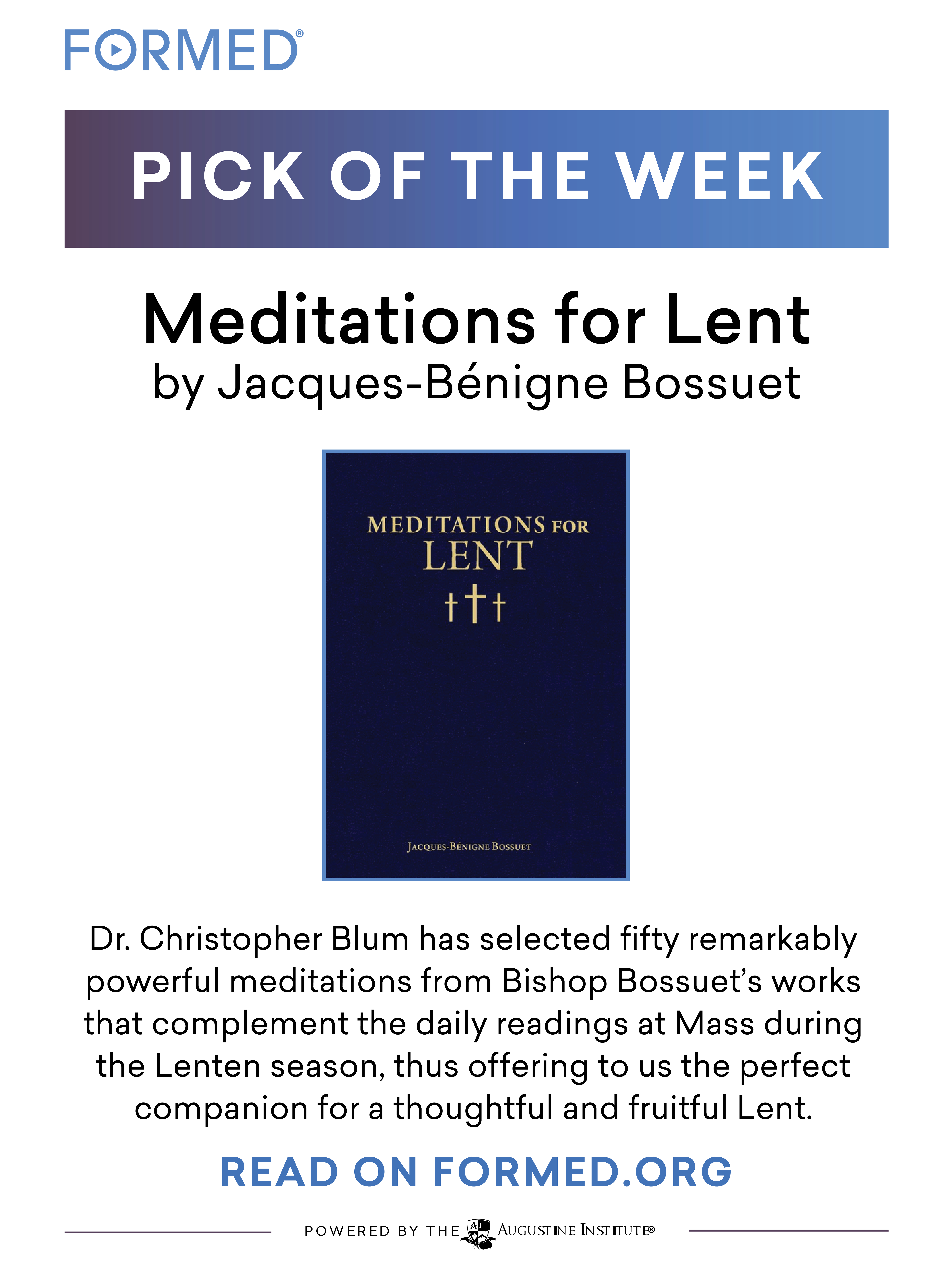 Meditations for Lent by Jacques-Bénigne Bossuet

Pulpit Announcement:
In honor of the beginning of this Lenten season, join us in reading “Meditations for Lent” by Bishop Bossuet. This eBook, along with many others, can be downloaded without cost on formed.org. Sign up for your free subscription by simply selecting our parish’s name at formed.org/signup.

Pick of the Week Archives

Pulpit Announcement:
Check out a free talk by Fr. Mike Schmitz on formed.org. In this talk, “Jesus is…” Father Mike reveals the incredible implications of the question that Christ asks all of us: “Who do YOU say that I Am?”

Pulpit Announcement:
The Feast of Our Lady of Lourdes is on February 11, and to celebrate we invite you to join us in watching the film “Bernadette” on formed.org. St. Bernadette was one of the small children Our Lady appeared to many times in Lourdes, France and this film retells the epic story.

February 16: Lectio: Peter – The Primacy of the Church

Pulpit Announcement:
This Friday, we celebrate the Chair of Peter the Apostle. Pope Benedict XVI described the chair as “a symbol of the special mission of Peter and his successors to tend Christ’s flock, keeping it united in faith and in charity.” Dr. Tim Gray walks us through the significance of Jesus giving Peter the “keys of the kingdom,” and how through Peter’s mission, He was restoring and perfecting his Church.

February 23: Desires of the Heart by Sister Bethany Madonna

Pulpit Announcement:
This week’s highlight is a talk called “Desires of the Heart” by Sister Bethany Madonna, vocations director of the Sisters of Life. Access this talk and many others from other popular Catholic speakers on formed.org with your free parishoner subscription.

January 5: The Case for Jesus by Dr. Brant Pitre

Join us in celebrating the Epiphany of our Lord by listening to “The Case for Jesus” by Dr. Brant Pitre on formed.org. Dr. Pitre exposes the problems with and debunks the lies of the many false theories that have resulted in widespread skepticism about the reliability of Christianity.

This week, the Church celebrates the Baptism of the Lord. The Augustine Institute original series, Reborn, sheds light on the graces in every part of the Rite of Baptism. Join us in learning more about the gift of this sacrament through watching the episode “Reborn – The Rite Explained” on formed.org.

January 19: Symbolon: Living the Faith – Protecting the Dignity of the Human Person

January 22 is the Day of Prayer for the Legal Protection of Unborn Children. As members of Christ’s body, we are called to protect and promote the dignity of the human person in all places and circumstances. Join us in learning more about protecting life by watching “Symbolon – Protecting the Dignity of the Human Person” on formed.org.

Pulpit Announcement:
On January 28, we celebrate the feast day of Saint Thomas Aquinas, doctor of the Church. Matt Fradd’s podcast, Pints with Aquinas, offers us an episode with 12 quaint stories about this saint to honor him on his feast day. Listen to “Pints with Aquinas – 12 Stories about Aquinas” on formed.org.

Pulpit Announcement:
Today marks the first day of the holy Advent season. We invite you to join us on a journey through Advent with Mary. Each week, we will be diving into an episode of Lectio: Mary with Dr. Brant Pitre. This week’s episode is about the new fulfilling the old. As Jesus is the New Adam, Mary is the New Eve.

December 8: Guadalupe: The Miracle and the Message

Pulpit Announcement:
This Thursday, December 12, we celebrate the miraculous apparition of Our Lady of Guadalupe to San Juan Diego. Join us in watching Guadalupe: The Miracle and the Message on formed.org. This riveting film, narrated by Jim Caviezel, explores both the inexplicable mysteries behind the image, and the continued relevance of the Guadalupe apparition to the modern world.

December 15: Prepare the Way of the King by Dr. Scott Hahn

Pulpit Announcement:
Join Dr. Scott Hahn in preparation for Advent by listening to Prepare the Way of the King on formed.org. This talk by Dr. Hahn invites us to journey deeper and further into the season in order to truly be prepared for the coming of Christ.

December 22: The Story of the Nativity

December 29: Pope Francis on the Family

Pulpit Announcement:
Looking for a good book for the winter season? Join us in celebrating the feast of the Holy Family by reading a collection of the Holy Father’s addresses, called “Pope Francis on the Family,” on formed.org. Pope Francis encourages families to be witnesses of love, fidelity, and service in opposition to the deep crisis facing the Western world. He emphasizes the primary role of God and faith in family life and the crucial importance of family prayer.

Pulpit Announcement: As the nephew of Pope Pius IV, Saint Charles Borromeo was one of the wealthiest and most powerful men in Rome. Yet he chose the extraordinary challenge of reform, and willingly spent himself in the service of his flock. Go to formed.org and watch True Reformers, episode 4: Saint Charles Borromeo.

Pulpit Announcement: Tim Staples explains the incredible impact that the Church’s understanding of Mary has on our spiritual lives, and the profound way that Marian doctrines and dogmas safeguard what we believe about her Son. Go to formed.org and listen to Mary: The Indispensable Mother of God.

Pulpit Announcement: Giuseppe Moscati, “the holy physician of Naples,” as a medical doctor and layman in the early twentieth century who came from an aristocratic family and devoted his medical career to serving the poor. Go to formed.org and watch St. Giuseppe Moscati.

November 24: Symbolon: Knowing the Faith, Who is Jesus?

Pulpit Announcement: With the Solemnity of Christ the King this week, we have the opportunity to contemplate the dichotomy of Jesus as both fully human and fully divine. Interested in deepening your understanding of the identity of Jesus Christ? Go to formed.org and watch Symbolon: Knowing the Faith, Episode 5 – Who is Jesus.

Pulpit Announcement: Discover the historical significance of the apparitions at Fatima with Father Michael Gaitley. Go to formed.org and watch to Divine Mercy episode 6: Fatima

Pulpit Announcement: As a complacent Carmelite, Teresa of Avila was an unlikely choice for a reformer. But after having her eyes opened, she began living totally for God and brought major change to her order. Go to formed.org and watch True Reformers, episode 5: Saint Teresa of Avila.

Pulpit Announcement: This epic film follows Karol Wojtyla’s journey from his youth in Poland through his late days on the Chair of St. Peter. Go to formed.org and watch Pope John Paul II.

October 27: The Crisis of Happiness: Hurting, Addicting, and Healing

Pulpit Announcement: Addictions and distractions are used to manage pain—but in the process, end up damaging our brains, our relationships, and our ability to find lasting happiness. In this Lighthouse Talk learn about scientific evidence and practical advice for overcoming wounds and finding healing. Go to formed.org and listen to The Crisis of Happiness: Hurting, Addicting, and Healing.

September 15: Drawing Strength from Our Lady of Sorrows

Pulpit Announcement: Kimberly Hahn, wife of Dr. Scott Hahn, shares how she came to know and love Mary as an example of drawing closer to Christ through suffering. Go to formed.org and listen to Drawing Strength from Our Lady of Sorrows.

Pulpit Announcement: Is the Bible more than just a collection of ancient writings, more than simply an important historical document to be appreciated but ultimately dismissed? Go to formed.org and watch Symbolon: Knowing the Faith, Episode 3.

Pulpit Announcement: Think you know the real Saint Francis? You’re in for a surprise with this exciting audio drama. Go to formed.org and listen to Brother Francis: The Barefoot Saint of Assisi